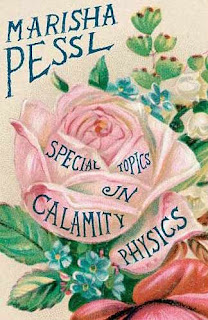 Let me be honest with you from the very beginning and tell you that "Special Topics in Calamity Physics, Marisha Pessl's debut novel, is one of my favourite books. It came recommended from my father whose opinions - on books as well as in general - I have a lot of respect for. So when he handed me his copy of this long book with the beautiful girly cover and the strange title, I knew that I had to read it - the dichotomy of title and cover alone was enough to intrigue me. This was a few years ago and now I re-read it recently and it was just as great as I remembered.

What is this novel about, you ask yourself? The title doesn't really give anything it away - and then maybe it does. But not in the way you expect. Blue van Meer is a motherless American teenager living a life less normal with her professor father who is specialized in development politics and social sciences and who takes up guest positions at three or four different universities a year. Together they travel the country, living as nomads while Gareth, Blue's father, tells her story of her beautiful late mother and fills her head with as much academical knowledge as he can force in there.
Blue is quite a child prodigy or a teenage prodigy, clever for her age, intellectual, with outstanding academic records and few friends. She is the narrator of the story where we follow her and her father as they settle in a new town where Blue is befriended by the mysterious high school teacher Hannah Schneider who has collected a group of talented students around her in a group referred to as The Bluebloods. From the very beginning she is eager for Blue to join their little merry group and though reluctant to do so at first, Blue suddenly has a group of friends though she doesn't exactly fit in with them. She is somewhat scared by the bohemian Leulah, the handsome Charles and the other Bluebloods who all have twisted, strange pasts. Then one day Hannah dies (this is not a spoiler - it is mentioned at the very beginning of the book) and then it all comes tumbling down. It is a story that wants us to reflect on what we actually know about the people that we know, it is about identities and narratives that twist and turn and make it impossible to find the truth.

When it came out "Special Topics in Calamity Physics" it received a lot of really great reviews and some critical ones. Overall though, it was quite popular and I have to say that I love it though it is probably not for everyone. There is not clearcut definition of what this book is in terms of genre - a coming-of-age novel, a crime novel, a mystery. A literary gem if you ask me! There is so much about this book that I love. The fact that the chapters are named after literary milestones such as Othello, the fact that Blue has an enormous knowledge about and love for books and quotes the all the time. The story is amazing and has one of the best and most well-thought-out endings ever.
Most of all, however, I love the characters. The pretentious Gareth who is not really a nice guy and who is definitely selfish and has a huge, inflated ego - his bad sides only remedied by the fact that he has unconditional love for Blue. Blue is, however, easy to love. She is a pretty honest narrator and her voice and story is full of the teenage worries that I think we all know. The "am I good enough?"s, the worry about the future, about boys. She is so clever, intellectually and academically, yet so socially awkward, and I found myself wondering what became of her after the book ended. For me that is one of the best indicators of a successful literary character.

All in all I can only recommend this book - but be aware that it is long and that the last part is unputdownable so reading it in bed when you really should be sleeping is dangerous to your beauty sleep.

Read it if: You love books and like your heroines clever and full of reflections on life. If love conspiracy theories, mysteriousness and a good story.
Posted by Willa

Are you looking for a good book? Try one of these:

Bits and Pieces from WWW